Evil Dead 2: Dead by Dawn™ is an Escape Room for Fans, by fans

Evil Dead 2: Dead by Dawn™ has been one of my favorite movies since a much younger and well-coifed me walked through my local movie house doors to see it for the first time in 1987. In it, Sam Raimi, Bruce Campbell, and everyone involved managed to elevate schlock to high art, overacting to overachieving, and it reinforced for that younger me (leather Jacket, Travolta Hair, Wallet on a chain – you get the idea) that a good scare and a good laugh need not be two different things. In my career in animatronics and sculpting, Evil Dead 2: Dead by Dawn™ has served as a constant source of inspiration, and ever since I opened Hourglass Escapes, it has been a goal of mine to create an escape room based around the movie. The day we got the license was a big one for our small company, but it was also a big one for me, personally. 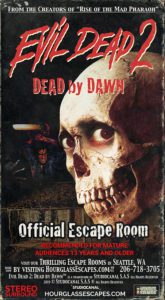 Then came the dread, and not the kind that comes from when you realize you’ve accidentally booked into a haunted AirBnB – I mean, you really should have known from the description: A cabin in the woods? One bridge in and out? And why would the owner, someone named Professor Knowby, list “creepy cellar” as the cabin’s main feature? Anyway, the kind of dread I was experiencing was the pressure in knowing that I suddenly had the responsibility, not only to other fans of the movie, but also to myself, to make an escape room worthy of Raimi’s and Campbell’s genius.

The hard work was just beginning.

Even though we’d all watched Evil Dead 2: Dead by Dawn™ countless times, the team and I tasked ourselves with watching it repeatedly. With each iconic scene and unforgettable moment, we asked ourselves, ‘How could this be implemented into an escape room?’ Or ‘What would a puzzle of this event look like?’ Or ‘Do you think we’d get sued if we sprayed the participants with ten gallons of blood?’

It has been a challenging endeavor. Not only did we need to create amazing puzzles to challenge the participants, but we also had to retain the humor and horror of the movie. At least to that end, I know we’re in good hands because we’ve brought in Andrea Hays, who you’ll remember as Heidi from Twin Peaks, and Yuri Lowenthal, one of the best and funniest voice actors working today. Not only has he starred in some of our favorite shows, like RWBY, where he does the voice for Mercury Black, and in some of the world’s most popular video games, like Call of Duty and Spider-Man, but we also know that he’s always down for a good game from his guest spots on Wil Wheaton’s Tabletop.

Andrea and Yuri have done an amazing job capturing the movie’s tone. And I dare say that my team has matched their acting by creating an escape room experience that is worthy of the Evil Dead 2: Dead by Dawn™, because it’s an escape room that hasn’t just been designed and handcrafted by veterans of the format, but also by some of the biggest fans of the movie you’d ever want to meet…seriously, if we were any bigger fans, you wouldn’t want to meet us because all we could talk about would be Evil Dead 2: Dead by Dawn™.

If you’re in the Seattle area, tickets are on sale now through our website. Book your Evil Dead 2: Dead by Dawn™ experience now! 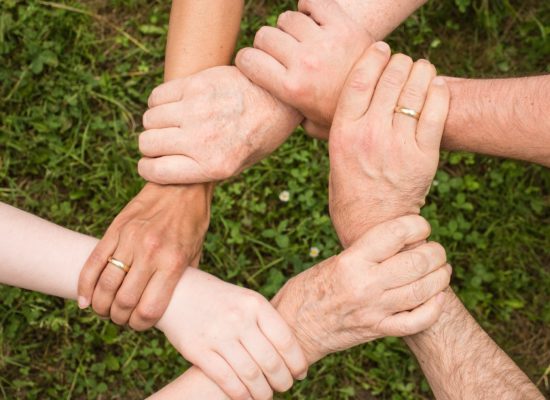 Escape. Be it from our daily grinds, awkward situations at a dinner party, or... 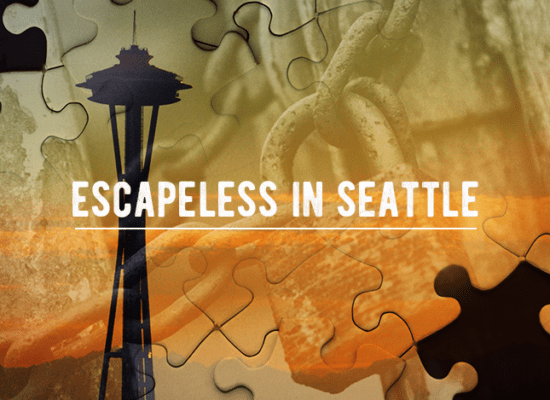 How to Find an Escape Room Near You

Now that you know what an escape room is, you’re probably asking Google for ‘escape...

Escape rooms are a popular type of entertainment where players are locked in a room...

We asked some of the most well-known escape room experts for their advice for beginners...
← Seattle’s Best Booze Free Activities
How the Evil Dead 2™ Board Game has changed Kickstarter forever! →